Tirzepatide vs. Semaglutide For Weight Loss

Tirzepatide vs. Semaglutide For Weight Loss

Many HCG Diet Miami & Semaglutide for Weight Loss patients ask about the respective benefits of two leading weight loss supplements available through prescription – tirzepatide and semaglutide – and which one is best for achieving their goals.

Both semgalutide and tirzepatide, which rely on similar mechanisms of action, are proven to help patients lose weight and keep it off. But there are differences between the two to consider that we’ll explore coming up.

In the final analysis, we’ll compare the weight loss results based on clinical data following therapy with either tirzepatide or semaglutide.

What is semaglutide and how does it promote healthy weight loss?

The breakthrough weight loss medication semaglutide (marketed under the brand names Ozempic and Wegovy) works by mimicking the activity of a peptide hormone called glucagon-like peptide-1 (GLP-1) receptor, which it is virtually molecularly identical to.

Semaglutide is arguably the top weight loss supplement available on the US market today. It’s very affordable and its efficacy is backed by extensive clinical research, including a landmark 2021 study published in the New England Journal of Medicine.

At the end of the trial, the patients who received semaglutide had lost an average of 14.9% of their body weight while the placebo group had only lost 2.4%, demonstrating an enormous beneficial impact of semaglutide on weight loss.

Furthermore, the patients in the study who received semaglutide “had a greater improvement with respect to cardiometabolic risk factors” and reported “a greater increase in… physical functioning from baseline” compared to the placebo group, so the supplement also improves metabolic (energy processing) and cardiovascular (heart) health.

The Food and Drug Administration (FDA) approved Semaglutide as weight loss therapy nearly two years ago, and its use in weight loss clinics has greatly expanded since.

What is tirzepatide and how does it promote healthy weight loss?

Tirzepatide works very similarly to semaglutide with slight differences in the mechanisms of action.

Like semaglutide, tirzepatide (marketed as Mounjaro) is a GLP-1 receptor agonist, meaning it stimulates the GLP-1 receptors to drive weight loss.

In addition, though, tirzepatide is a gastric inhibitory polypeptide (GIP) analog, which stimulates the pancreas to release insulin, an important hormone in the processing and storage of blood sugar.

This means that tirzepatide exerts dual mechanisms of action, through the simulation of GLP-1 and GIP receptors, which increases pancreatic beta-cell function, boosts insulin sensitivity, and ultimately induces weight loss.

Via the Journal of Clinical Endocrinology and Metabolism:

“Beta-cell function was enhanced and fasting glucagon levels were reduced to a greater extent by tirzepatide than by the selective GLP-1 receptor agonist, dulaglutide. Tirzepatide improved multiple markers of pancreatic beta-cell function as shown by dose-dependently increasing HOMA2-B indices and decreasing proinsulin levels.”

Also, like semaglutide, tirzapeptide increases adiponectin levels by as much as 26% following 26 weeks of therapy, which further enhances insulin sensitivity and beta-cell function as well as reducing systemic inflammation.

A major study of tirzapeptide, published in the New England Journal of Medicine in July 2022, a 72-week study in which trial participants with obesity received 5, 10 mg, or 15 mg of tirzepatide on a once-weekly basis “provided substantial and sustained reductions in body weight.”

By week 72, the average participant receiving tirzapeptide had achieved a 15% body weight reduction. 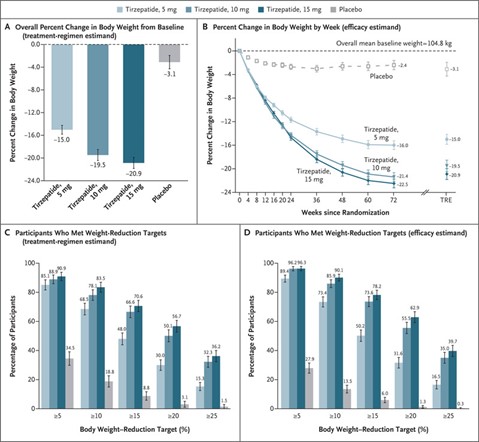 It gained significant popularity after the media ran numerous stories heralding it as the future of weight loss.

Let’s explore some of the similarities and differences concerning semaglutide vs tirzepatide as it pertains to weight loss:

The only key difference between the two is that tirzepatide acts on both GIP and GLP-1 (although it binds more strongly to GIP receptors than GLP-1 receptors), whereas semaglutide only acts on GLP-1 receptors.

Finally, let’s get down to brass tacks: which one produces superior results? Here’s the side-by-side data:

So, the bottom line is that the medications are virtually indistinguishable in terms of the weight loss results they deliver via the optimization of hormonal signaling.

To learn more about the respective pros and cons of tirzepatide and semaglutide for weight loss, please feel free to contact us.

Javier Alejandro is ready to put his extensive clinical experience to work for you as he has for thousands of weight loss patients already with consistent success.

If you’re too busy to carve out a time to physically come into the office, consider our convenient telehealth consultations.